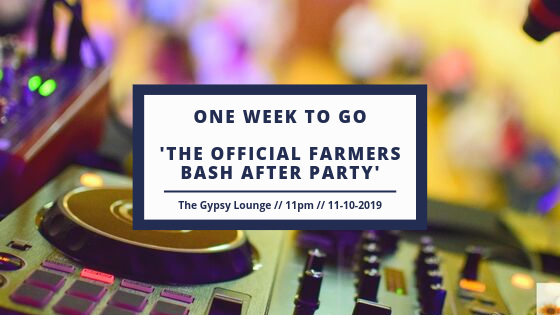 Next week we’re taking things a little ‘country’ in Belfast!

Of course with DJNI we cover all the bases; chart, pop, cheese, 50s right through to current day but come Friday 11th October we’re dusting off our checked shirts, polishing the brown boots and gearing up for Belfast’s biggest ever country DJ night!

Straight on the heels….(literally) of the massive, and most probably, sell out Farmers Bash concert at the SSE Arena, we’ll be spinning the country disks over at the Gypsy Lounge in Filthy McNasties on the Dublin Road.

We’re pleased to of been booked by the guys at Farmers Bash HQ for this special event, in what promises to be a really special night, playing some of the best in Irish and American Country music.

Last night we dropped in with the folks at the Filthy Quarter to check out the venue and we cant wait for you guys to see it! In what promises to be an amazing night with a cracking atmosphere (and of course music) and maybe a few surprise appearances, you won’t be disappointed!

Also if you’re at the Farmers Bash Concert in the SSE Arena and are worried about how to get over to Filthys, don’t fear, the amazing organisers have laid on a free shuttle service from the SSE for all After Party ticket holders…and if you haven’t got a ticket, check out the link below before they’re gone! It’s expected to sell out.

Tickets for our OFFICIAL AFTERSHOW are flying out! And the great news is we will be running FREE BUSES from the Farmer’s Bash at The SSE Arena, Belfast to the After Show. Get your TICKETS NOW to AVOID DISAPPOINTMENT >>> https://t.co/CbEzPmyqWg

Tickets are priced at £10 each and the only Official Farmers Bash After Show will run from 11pm – 2am.