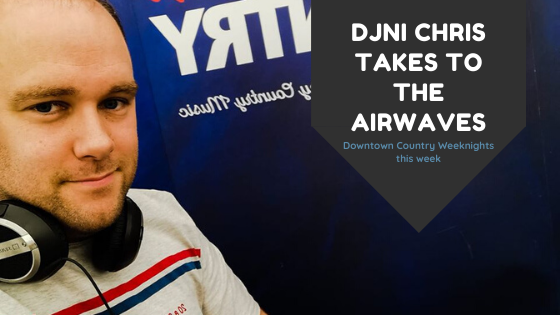 Last night DJNI’s Chris travelled up to the home of Country Music in NI, Downtown Country, located in Newtownards. He took to the hot seat to present Country Chilled. Kicking off at 10pm he played some of the best of classic and compemporary chilled country music.

The specifically country station is owned by Bauer Media, who also own Cool FM and Downtown Radio and a number of stations across the water in Great Britain.

Commenting on the experience Chris said “I was a little nervous going in but once things settled I felt fairly comfortable behind the mic and appreciated the messages from friends of well wishes and support”.

Chris will be back on again tonight (Tuesday) and again tomorrow. After that it’s at the hands of the Downtown Country Management to see where things stand.

“Radio has always been my Dream” commented Chris, “It’s something I’ve always wanted to do since a child and to present on one of the biggest commercial stations in the country is just that dream coming true…lets just not mess that up!”

You can listen to Downtown Country on any digital radio appliance, online via www.downtowncountry.co.uk or on your smart device via the Downtown app.