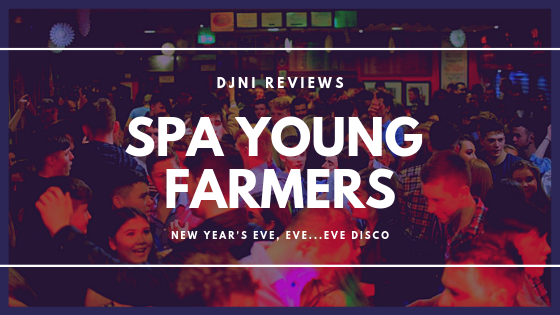 Last month saw us return to Spa Young Farmers located just outside Ballynahinch, Co. Down. In the summer we had the privilege of providing music for their annual summer BBQ which was immense, so we knew when we agreed to do their “New Year’s Eve, Eve…Eve” disco, we weren’t going to be disappointed.

This one took place in Ballynahinch Rugby Club and once we arrived on site ahead of time we took into setting up. It’s nice to be early and the bonus of this meant there’s less pressure to get the music on asap. The club were flexible in letting us in and this always helps.

Once setup we had a chance to relax, the calm before the storm so to speak as once we got going, there was no turning back…and what a night it was! Once the crowd had gathered in, we wouldn’t event say it was standing room only. Starting off we played some commercial pop/dance, later moving into the usual cheesy tunes, from Grease to Footloose and some Queen for good measure. We wrapped up the night with some classic old skool beats. Sadly when the lights came on it was time to wrap it up.

Thanks again to Spa for having us along for a second time, we really appreciate it and to all the club members, we wish you a great 2019 and keep safe around the farms.